Official statements on the trade fair:

MYKOLA CHECHOTKIN
Head of the State Emergency Service of Ukraine

Over the years, the event has become the main trade fair in the field of fire and occupational safety, personal protective and rescue equipment. After all, it is the implementation of the newest products and innovative technologies, modern technical security systems and means of protection in Ukraine that is a guarantee of the security of every person and the state as a whole. That is why the fair is a great opportunity for the Service to study various emergency & rescue equipment, firefighting gear, to communicate with experts and further develop principles according to which we will update facilities and equipment of the State Emergency Service of Ukraine. Interaction and communication of the exhibitors and visitors, discussion of current scientific and manufacturing issues within event program of the fair will facilitate sharing information for professional development, putting it into practice and decision‑making processes to fulfill the main tasks of the Service.

The honored guests took part in the opening ceremony and the overlook of the exposition:

The exhibitions program comprised 37 scientific and presentational events. Joint format of the exhibitions made them a large‑scale international business and scientific event dedicated to a full range of issues of security of state and society. In general, 3 exhibitions covered the total space of over 30 000 sqm – 27 000 sqm in three halls indoors and over 3 000 sqm outdoors. 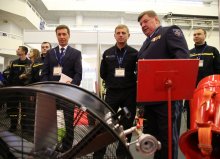 Over 24 000 trade visitors attended the exhibitions, including the representatives of foreign companies from approximately 50 countries. The biggest number of visitors came from Turkey, Poland, Lithuania, China, UK, Slovakia, Czech Republic, France and UAE.

Among more than 70 exhibitors there were Ukrainian manufacturers and distributors, as well as foreign companies from Belgium, Ireland, Canada, USA, China, Italy and Germany.

The relevance of the event for the country was shown by a notable quantity of visitors – around 4 000 trade visitors from Ukraine and abroad.

The event attracted the attention of the representatives of the State Emergency Service of Ukraine, emergency rescue service units, united territorial communities and experts in fire and occupational safety from all over Ukraine, which indicates the interest in the topic by both specialists and the general public.

State Emergency Service of Ukraine was represented by 5 research and educational institutions from Kyiv, Kharkiv, Cherkasy and Lviv.

Star Technology demonstrated new products made by Polіmaster (Bіlorus): dosimeter РМ1300 and smuggling detector РМ2030. Products of Ego Zlin (Czech Republic) were also on display: vacuum fixation splints and stretchers for patients with fractures of the limbs and other body parts. In addition, the company demonstrated a backpack dosimeter with a new function of detecting the direction towards the source of radiation.

Talanlegprom unveiled a newly developed model of footwear for fire brigades of the Armed Forces of Ukraine, which had recently undergone military tests. New special boots withstood the test by fire, water and other severe conditions.

Novator Group of Companies showcased its new product – fire extinguisher simulator SIM‑2, which is based on VR technology. Among the advantages of this solution is the opportunity to train anywhere, in any weather conditions, while avoiding danger and sparing time. The simulator does not require the use of personal protective equipment and a separate fireproof space and the availability of different kinds of fire extinguishers and their recharging.

Post‑01 presented new Holmatro (Netherlands) products for firefighting and rescue operations: Greenline battery cutters and spreaders. The main advantages of the tools are the improved battery life, portability and performance.

Manu, among many other products, demonstrated a universal full‑body insulating suit DEMRONTM Class 2 CBRN manufactured by Radiation Shield Technologies (USA). The suit, thanks to DEMRONTM fabric, provides resistance to X‑ray and ionizing radiation, while reducing heat generation inside the suit.

Bastion‑Kyiv demonstrated modern portable aerosol fire extinguisher PFE‑1, which has a wide scope of application: on various types of transport, in the office, at construction sites, during riots, etc.

Decontex (Belgium) showcased technology that cleans, decontaminates, disinfects and re‑impregnates firefighting clothing, while retaining its protection capabilities which helps prevent adverse health effects. This technology is based on CO2 liquid, makes sure the clothing is free of toxic substances and micro‑organisms and is odorless.

Cristanini (Italy) offered SANIJET autonomous decontamination systems, which are used to treat people, vehicles, equipment, premises, etc., which are contaminated with CBRN substances; degassing of tanks and fuel tanks, their sterilization, as well as for firefighting. Besides, a hi‑tech FireStop 200/30 system for the initial firefighting activities using the patented Water Mist technology was presented at the booth. One of the important aspects of this technology is minimization of the water use to extinguish fires, while traditional extinguishing systems (hydrants, hoses, etc.) use a lot of water that often floods floors, damages and pollutes large areas and surface volumes.

Canadian Technology Systems (Canada) presented a modern system for the remote disruption of explosive objects – Lance disrupter. This system is intended for the disruption of especially dangerous objects, which can not be removed from their location, at a distance of up to 150 m.

Terra Hexen (Poland) introduced an innovative fire extinguishing spray iBlock Fire - a universal environmentally‑friendly multiple‑use fire extinguisher, which can be used at the farms, as well as by firefighting and military units.

pressure of 10 to 60 atm, and length ranging from 1 to 55 meters. The products can be used not only for extinguishing fires, but also for ensuring technological processes at the production sites, chemical industry enterprises, agriculture and housing and utilities sector.

Legio demonstrated a firefighter suit in four variants, among which the latest development was presented – "Extreme" firefighter suit. It is a lightweight, comfortable and safe outfit made of aramid fiber, weighing up to 3 kg, which has physical and technical parameters that knows no equals not only in Ukraine but also in Europe.

Benzotrade showcased chainsaws produced by Stihl (Germany), which are used for emergency rescue and firefighting missions.

Poseidon Store presented diving gear and equipment for rescue teams made by such companies as OTS, N.Diver, Kirby Morgan, Nardi and Scubapro.

During the fair, visitors had an opportunity to take a look at 5 units of modern fire and rescue vehicles.

This year's newcomer – specialized armored vehicle КОZАК‑5PML for EOD brigades – was unveiled during the fair. It is designed to transport unexploded mines and improvised explosive devices. The vehicle is a specialized modification of the light universal armored vehicle

"Kozak‑5" and is also based on Ford F550 chassis. The constructive difference lies in a longer wheel base and a special construction of its body that allows to withstand the blast wave in the event of unsuspected explosion of mines/IEDs that are transported. Besides, the vehicle has a technical compartment for special EOD equipment.

transportation through all kinds of roads (marshland, water) of rescue teams and special equipment to emergency scenes, ensuring search & rescue operations and providing medical assistance to the affected persons.

In addition, experts had an opportunity to see a special lightweight emergency rescue vehicle based on Volkswagen Caddy chassis equipped with special hydraulic and fire rescue equipment that meets European standards. The vehicle can be used to alert the public about emergency situations, organize radiocommunication, fire extinguishing at road accident scenes, illumination and provision of medical assistance to the affected persons.

Besides, tanker truck АЦ‑4‑60(5401НЕ)‑515К on KrAZ chassis was brought to public attention. It is intended for fire protection of urban and rural settlements and industrial objects.

The program comprised 13 informational and educational, science and practical seminars and conferences, as well as presentations organized by commercial companies. 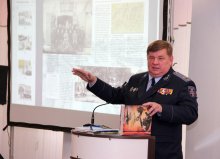 During the fair, there was a presentation of the book "Firefighters. History of Firefighting in the Territory of Modern Ukraine", which was created by the editorial team under the guidance of the Head of UkrCPRI, Vitaliy Kropyvnytskyi, and is unparalleled in Ukraine. "In this book, we tried to look at the development of fire protection in the context of historical processes, to show the thin threads that connect these phenomena into a single whole. The history of fire protection in the territory of modern Ukraine is multidimensional and multifaceted; it is full of fates of people devoted to their cause, acts of heroism and self‑sacrifice, " said Mr. Kropyvnytskyi.

Institute of Public Administration in the Sphere of Civil Protection traditionally organized XX All‑Ukrainian Research and Practical Conference "Modern status of civil protection in Ukraine and prospects of development". The plenary session was opened by the Deputy Head of the State Emergency Service of Ukraine Ruslan Biloshytskyi. During the conference, scientists and experts in the field of civil protection discussed the current state and prospects of reforming the supervision activities of the SESU, current issues of the safety culture in the field of civil protection, problems of the organization and improvement of professional training of rescue units, achievements and future directions of development of educational and scientific activity of higher education institutions of SESU.

UkrCPRI hosted a Round Table "Investigation of fires. Modern status and prospects of development". The event gathers and unites 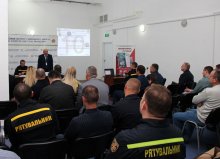 a wide circle of professionals of expert divisions, research and testing laboratories of the SESU and scientific community from scientific institutions and higher educational establishments to discuss issues that arise during the investigation of fires and the determination of their causes.

Resourcing Department of the SESU hosted a seminar on current relevant issues which was attended by over 50 representatives of the Executive Office and regions. Seminar attendees also got an opportunity to review the products presented at the exhibition, communicate directly with the market players and consider possible cooperation with the relevant enterprises. Department for Organization of Civil Security Measures held a educational and methodological seminar "Implementation of engineering activities of civil protection in urban development and design documentation". Department of Emergency Prevention held a seminar on state supervision in the field of civil protection, and fire & technologic safety.

Pozhmashina hosted a conference "Prospects for the development of fire and rescue equipment in Ukraine".

Decontex (Belgium) presented its products within its event "European study on the contamination and decontamination of fire intervention gear". 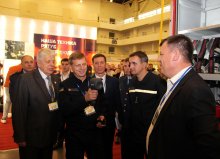 OZON S held a seminar "Application of cloud computing technologies for informing and alerting the public about emergency situations".

Representatives of Media‑Pro shared the best experience during their own event "Fire and Technogenic Safety‑2018: Best Experience".

Another highlight of the event wasthe new imageof the "Protection Technologies/FireTech" trade fair which was presented to exhibitors and visitors.

The event once again confirmed its renown of the main trade fair in Ukraine in the field of emergency response and fire & industrial safety, emphasized the importance of this industry in the overall security system of the state and provided the experts of various levels and regions of Ukraine and from abroad to get to know current market trends and share expertise.