The whole civilized world justly consider trade fairs and standards of the exhibition centers to be the face of nation and the indicator of industrial and humanitarian development of any country, respectively. Since the expo‑blocks of the International Exhibition Centre were commissioned, Ukraine gained the opportunity to organize and to hold exhibitions, congresses, presentations, sporting events and colossal world‑class show events. 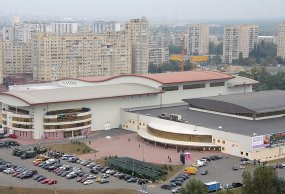 The International Exhibition Centre is the biggest expo building in Ukraine combining four premium‑class pavilions into unified architectural ensemble with 73228 square meters of total area, including 38681,5 square meters of exhibition area, which engineering capability allows realizing of the most daring exhibition projects and holding of events of different scale and levels of complexity. Today we are the only one specialized complex in Ukraine, who can host massive events from 5 thousand to 18 thousand participants indoor.

The idea to build such a unique integrated facility incomparable to any other system in the country and acknowledged as one of the best in Europe belongs to Mr. Victor Tkachenko (at that time he managed Kyiv Palace of Sports, than in 2011 he became the president of IEC).

For it`s implementation, on the initiative of Kyiv Palace of Sports, the International Exhibition Centre Company was incorporated. The famous Ukrainian architect Mr. Yanush Wig was the project creator. Works on design were headed by Kyivproject, Inc. Mr. Eduard Safronov was the Chief Architect of the construction program. Architectural design work of the second stage (the second and third pavilions of IEC) was served by architectural private entrepreneur "Architect Gershenzon" (the chief architect of the project M. Gershenzon). The most significant contribution to the Exhibition Centre construction was made by "Ukrmonolitspecbud" concern (Goncharov L.I.), "Seim-93" company (Kaminskiy A.V.), CJSC "Energomontazhventyliacia" (Korbut V.P., Ishenko A.U.), OJSC "V. Shimanovsky UkrRDIsteelconstruction" (Shimanovskiy O.V.).

Mr. Anatoly Tkachenko was appointed to be IEC General Manager from the very beginning.

The integrated facility complies with all up-to-date requirements towards the buildings of that kind:

- The four expo-blocks have 20 gates to deliver bulky cargo directly to the exhibition halls. There is a congress‑hall and fourteen conference halls with capacity from 90 up to 600 places, negotiation rooms, premises for valuables and arms keeping, cafes and fast food restaurants, WCs, checkrooms, air conditioning system. Convenient driveways lead to parking lots for 1500 cars;

- Technical equipment satisfies any demands of exhibition operators and organizers of different events in terms of both design solutions and services. The exhibition halls can be easily divided by mobile partition walls into isolated rooms to stage several events at one and the same time.

- Floors can bear extremely high loadings and 25 meters from the floor up to frame works make it possible to deliver bulky cargoes by means of powerful crane trucks, enable the erection of 2-and 3-storey booths and various exhibition constructions.

- Each exhibitor and organizer of events can be provided with water and power supply and drainage, Internet access, direct phone number, telecommunication systems with simultaneous translation into appropriate language, office accommodations, banking and many other services. In general, there is nothing impossible for the International Exhibition Centre that does not breach the law and safety measures.

- The integrated facility is advantageously situated five minutes walk from Livoberezhna Metro station at Brovarskyi Avenue and only some stops by metro or 10 minutes away from the centre of the city. It also has good connection with Boryspil International Airport lying at 27 km distance. Direct underground connection will help our exhibitors, participants of events and guests to get to the International Exhibition Centre from the railway station. There are *** and **** star hotels Tourist, Adria, Slavutich and Bratislava nearby, where the IEC booking service will always reserve a required number of accommodations. 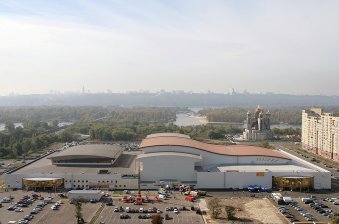 Since opening in October 2002, International Exhibition Centre right away became one of the recognized leaders in staging authoritative domestic and world forums. In fact, the first step of the IEC was the organization of the International Production and Safety '2002 Industrial Forum. A great exhibition "Industry of City to Kyivites" opened the season of 2003, and about fifty exhibitions of different trends were organized that year.

The current realities of the International Exhibition Center are more than 100 exhibitions per year, in which about 15,000 exhibitors from more than 40 countries present their achievements in front of almost 700 thousand visitors.

The Executive Assembly of the World Energy Council was attended by 344 delegates, including the WEC executives, members of national energy committees, chairpersons and key experts of energy ministries and organizations as well as their attendants from 65 countries of the world. Among the CIS countries only Ukraine was honored to be a venue of this annual forum (WEC includes 90 countries). The Day of Energy Sector of Ukraine and the exhibition of equipment, technologies and scientific achievements of the branch were the key occurrences of this forum organized by International Exhibition Centre in association with the Ministry of Fuel and Power Engineering of Ukraine. Chairman of the World Energy Council Antonio del Rosario and Secretary General of the World Energy Council Jerald Dusset attended the Assembly. 106 journalists presenting the leading overseas and almost all domestic central, local and branch editions were accredited at the Press Centre of the International Exhibition Centre to cover these events. 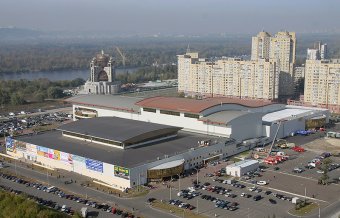 20th OSCE Ministerial Council was culmination of Ukrainian Chairmanship of the OSCE and the biggest international event of the intergovernmental character of the territory of Ukraine since its independency. For the high level of the OSCE Ministerial Council preparation and organization OSCE General Secretary Lamberto Zannier expressed his personal gratitude to Anatoliy Tkachenko, General Director of International Exhibition Centre and presented a special award - OSCE Certificate.

With a great success in the IEC different events are taking place. Yes, that was us, who did presentations for embassies of many countries, presentations of new car models such concerns as BMW and AUDI, the premiere of the new version of Roger Waters Mega‑show, annual entertaining evenings of the restaurant network "Kozyrna Karta", 10th anniversary of the Kyivstar Company, the Football Federation anniversary, beneficiaries of pop stars and lots of other events.

Preparations for such a huge and multifaceted event showed, on the one hand, the extraordinary polyfunctionality of the complex, and on the other hand, demonstrated its high and almost unlimited technical capabilities.

Thus, in the 2nd and 3rd pavilions a concert hall for 11 thousand spectators was created.

There was installed a 30 tons weighing scene with a 350 square meters performance space.

The height of the screen, which became part of the scene, was 11 meters, it’s length was 70 meters. It became the largest concert hall that was ever built in Ukraine.

Nearby, in the 1st pavilion, there were comfortable rooms for participants and invited stars, a press center for nearly 2000 journalists and accredited fans, a conference room, a lounge area, and other necessary facilities.

The height and durability of the ceilings allowed to implement complex super heavy pods of light and sound equipment throughout the whole complex (in particular, in the center of the second hall, above the stage farms could stand up to 240 tons) and organize voluminous concert and theatrical effects. The lack of columns in the halls gave opportunity to realize any creative ideas of producers and participants of Eurovision.

During all days of the preparation and holding of the contest, climate equipment in IEC (International Exhibition Centre) provided comfortable conditions for the entire millennial community of organizers, participants, spectators, journalists and fans of Eurovision.

No wonder, that the executive director of the song contest, Jon Ola Sand, exclaimed enthusiastically: The International Exhibition Center is a great arena because it can adjust to Eurovision, and not Eurovision must adjust to it.

Today the IEC also organizes several prestigious exhibition events of its own. Most of them are supported by respective ministries, departments, associations, and international forums are held under the auspices of the Government of Ukraine and with participation of top state executives, who admitted the high level of these events more than once.

In October 2005, at the 72nd Congress of UFI (The Global Association of the Exhibition Industry) the IEC entered this authoritative organization in two categories at once: "Expocentre", and "Trade Fair Organizer". This approves high recognition level of International Exhibition Centre and proficiency level of its employees.