Dear participants and visitors of the Salon! 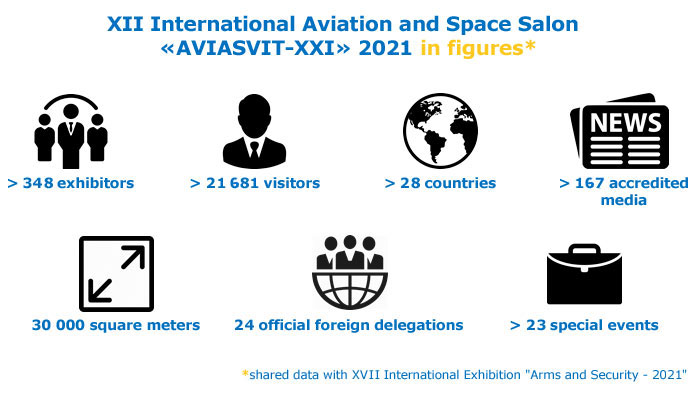 Ukraine has a full cycle of space technology development and experience in the construction of spaceports, as well as a complete production cycle of aircraft and equipment.

Since 2019, private companies are allowed to conduct space activities and even carry out space launches.

Ukrainian military transport aircraft proved to be among the best ones in the whole world.

Ukraine owns a powerful base of repair, aircraft and engine‑building enterprises, where nowadays the production lines are being re‑equipped, while programs directed towards the replacement of Russian components are being implemented.

Ukraine has bountiful traditions of personnel training, a large number of professionals, as well as significant research potential.

As for now, the aviation industry is becoming one of the most attractive and promising for investment in Ukraine, while air transportation in Ukraine has the highest growth rates in Europe.

YOUR PROSPECTS IN AEROSPACE SECTOR OF UKRAINE

Implementation of the national aviation transport strategy of Ukraine for the period up to 2030
- All regional airline hubs will be modernized in the country, and the market of airlines operating in Ukraine will be expanded. As a result, the total passenger traffic in Ukrainian airline hubs will increase to 100 million people in 2030.

Implementation of the strategy of the Ukrainian aircraft industry revival up to 2022
- As a result, the new types of transport aircraft, helicopters, unmanned aerial vehicles are expected to be developed, together with the modernization of existing models of passenger and transport aircraft and helicopters in cooperation with leading global aerospace companies; moreover, the interaction between the public and private sector will be expanded, as well as the international product certification systems will be introduced.

Space Program for the years 2018‑2022 provides for the cooperation with the European Space Agency, the development and launch of several Ukrainian telecommunications satellites, ensuring the interests of the state in the field of national security and defense.

Active implementation of the national missile program in particular, the development of modern missile systems, missiles and their components, as well as the creation of a powerful missile shield of our country.

Financing of the security and defense sector of Ukraine is provided at a level of at least 5% of GDP.

We invite R&D specialists, manufacturers and distributors to participate in the ХIII International Aviation and Space Salon "Aviasvit ‑ XXI", which will facilitate business networking, further development of industrial cooperation, and search for new business partners.